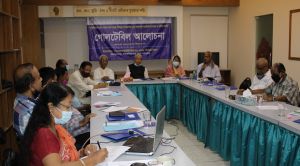 Speaking on the occasion Member of the Parliamentary Standing Committee on the Ministry of Labour and Employment Shamsunnahar Bhuiyan, MP, said that the number of women workers in the labour market is increasing day by day. Many of them are working as domestic workers. It is not enough to sign only policies or ILO conventions for them, but they have also to be brought under the labour law. This is possible only if all parties are sincere. Considering the amount of remittances sent by expatriate women workers what we are doing for them, she asked. She emphasized on formulating a policy for sending and receiving workers. 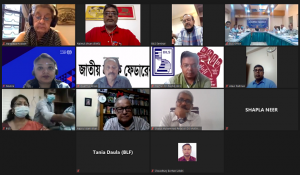 Sramik Nirapotta Forum-SNF Convenor Dr. Hameeda Hossain said, there should be a specific process for domestic workers so that they can file complaints if they are victims of torture. She emphasised the need for greater publicity to ratifying ILO Convention 189.

In his welcome speech, BILS Secretary General and Executive Director Nazrul Islam Khan said that millions of domestic workers have lost their jobs due to COVID-19 pandemic situation. They do not have employment letters, no fixed working hours, no fixed wages, so they do not get any benefits like the formal sector workers. Considering these, he opined that it is necessary to ratify the ILO Convention-189 on Decent Work for Domestic Workers.

Socialist Workers Front President Razekuzzaman Ratan said that if the work of domestic workers is not recognized, the work of women will not be recognized as well. Recognition of their work will create social values, and this convention needs to be ratified to create those social values. He called for the formation of a training institute for the training of domestic workers.

Speaking on the occasion, BILS Chairman Md. Habibur Rahman Shiraz said, Bangladesh presides over the conference where ILO Convention-189 is adopted. Since Bangladesh has voted in favor of this Convention, it is necessary to sign it.