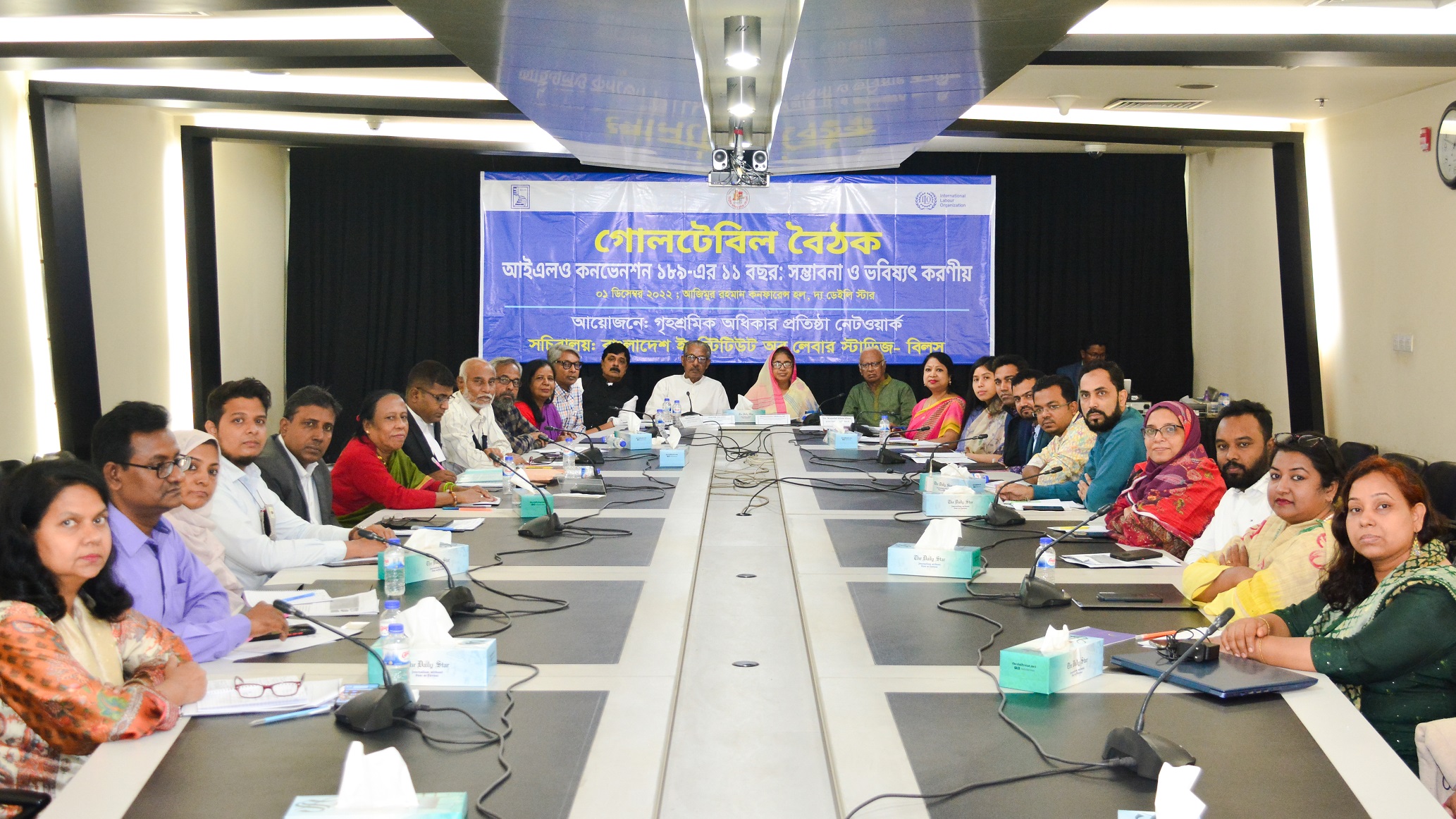 Trade unions and civil society representatives have called for the ratification of ILO Convention 189 on ‘Decent Work for Domestic Workers’ to ensure the rights, dignity and safety of domestic workers. Speakers made this demand at a round table meeting titled “11 years of ILO Convention 189: Prospects and Future Actions” at the Azimur Rahman Conference Hall of the Daily Star Center in the capital on December 1, 2022 under the initiative of the Domestic Workers Rights Network (DWRN).

BILS Advisory Council Member Shah Mohd. Abu Zafar chaired the meeting while Member of the Parliamentary Standing Committee on Ministry of Labour and Employment Shamsun Nahar Bhuiyan, MP was chief guest. In the speech of the chief guest, Shamsun Nahar Bhuiyan, MP said that everyone should work unitedly to ensure the rights, dignity and protection of domestic workers. She said, women’s rights are not a favor, they deserve it. Domestic workers are also our sisters or relatives, so their rights and dignity must be ensured. Everyone should work together for this. Mentioning that the labour law is being amended, she said, there should be a united movement to include domestic workers in the labour law and ratify ILO Convention 189.

In his welcome speech BILS Joint Secretary General Dr. Wajedul Islam Khan said that the trade union should enter the field in a united movement to rescue the domestic workers from the dire situation. In order to convert the domestic worker welfare policy into a law, everyone has to apply pressure on the government in unitedly.

Domestic Workers Rights Network (DWRN) Acting Coordinator Abul Hossain said Bangladesh is the only country in South Asia that has policies for domestic workers. But it is not implemented. Hope the government will pay attention to it.

Jatiya Sramik Jote Bangladesh president Saifuzzaman Badsha said that until domestic workers are included in the labour law, the government should play a strong role in implementing all the guidelines mentioned in the policy for their protection.

DWRN Member Secretary and BILS Director Nazma Yesmin said, Bangladesh has already set an example in South Asia in formulating a comprehensive policy for domestic workers through the formulation of Domestic Workers Protection and Welfare Policy 2015. The rights of domestic workers can be ensured by ratifying the ILO Convention 189 on the Protection of Domestic Workers along with the implementation of the policy.

In the Chair’s speech, BILS Advisory Council Member Shah Mohd. Abu Zafar said, Bangladesh was the President of the ILO session in which this convention was adopted, so it is very important to ratify this convention.