Call for protection of social security and rights of working people 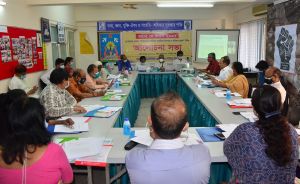 Speakers called for the protection of the social security and rights of the working people affected by the pandemic caused by COVID-19 or Corona virus. Speakers called this at a discussion meeting titled “May Day awareness: Social security and protection of workers’ during COVID-19 period”. On the occasion of the historic May Day, the Bangladesh Institute of Labour Studies-BILS organised the discussion meeting on May 6, 2021.

BILS Secretary General and Executive Director Nazrul Islam Khan said, working people are in trouble in COVID-19 situation and they are worried about their families. He said a large number of working people have lost their jobs due to COVID-19, most of whom are workers in the informal sector. Private sector workers are in uncertainty other than government employees. At such times it is the responsibility of the state to protect them.

In his welcome speech BILS Joint Secretary General Dr. Wajedul Islam Khan said, The consciousness of May Day is eight hours of labour, eight hours of recreation, and eight hours of rest, but even in the 135 years of May Day, these rights of workers have not been established. Noting that workers do not have minimum rights and social security, he called on all to unite for the realisation of workers’ rights. At the same time, he demanded the establishment of rationing facilities for the workers and specialised hospitals for their treatment.

Department for Inspection for Factories Establishment (DIFE) Inspector General Md. Nasir Uddin Ahmed said, using the experience of last year, the Crisis Management Committee is working on a new action plan this year to address the existing problems. He said the TCB has been instructed to conduct its activities in labour intensive areas so that the working people can get food at lower prices. Noting that efforts are being made to immediately resolve the grievances of the workers who came to the helpline of the DIFE, he called upon all to work together to resolve the problems of the workers.

Noting the country’s economy has suffered due to the COVID-19 Sramik Karmachary Oikya Parishad (SKOP) Joint Coordinator and Jatiya Sramik League Acting President Noor Kutub Alam Mannan called upon the trade union leaders at the field level to work together to implement the recommendations raised by the discussion meeting.

Workers Specialist of Decent Work Technical Team at ILO South Asia Syed Sultan Uddin Ahmmed said, the Great May Day movement was demanding an eight-hour workday, but in the lockdown, the government issued a notification exempting garment workers from certain working hours. The provision of the law is that exemption can be given if it is important to the people. This issue needs to be clarified.

ILO Social Dialogue and Industrial Relations (SDIR) project Chief Technical Advisor Neeran Ramjuthan said the employment, livelihood, and education of the workers have been severely affected by the present Covid-19 situation. In the current situation, workers need to ensure insurance benefits, compensation, and social security. He mentioned that effective social dialogue could play an important role in overcoming this situation.

Giyasuddin Ahmed, director of the labor department, said the government was working to ensure that workers did not lose their jobs and receive a salary bonus. He urged employers to be sympathetic to workers.

Mentioning workers work out of fear of corona, but employers delay paying their wages Department of Labour Director Giasuddin Ahmed said, in the current COVID-19 situation, the government is working to ensure that workers do not lose their jobs and receive a salary bonus. He urged employers to be sympathetic to workers.

During the meeting  BILS Deputy Director (Research) Md. Manirul Islam presents a presentation on social security and the protection of rights of workers. He said according to the ILO, global working hours have decreased by about 10 percent during the April-June period of 2020 due to Covid-19. About 305 million people worldwide have been directly affected. About 3% of the total labour force in Bangladesh has lost their jobs. He noted that between March and September 2020, about 0.4 million migrant workers lost their jobs. During this time 2.45 crore, new poverty was created. He also said that it was difficult to determine the number of workers affected as there was no specific database for workers. He added that the helplessness of the workers has increased due to the lack of adequate social security for the workers. It is important to form a high-level national steering committee comprising employers-workers, buyers and donor agencies to address the impact of workers during COVID-19. He further added that proper social dialogue and provision of national social security for the workers is the need of the current situation.

Speaking on the occasion, BILS Vice Chairman Anwar Hossain said that workers are working at the risking their lives so they should be vaccinated on priority basis. He called on the trade union leaders to come forward to raise awareness among the workers about the vaccine.