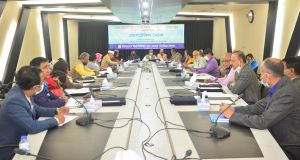 Speakers at a roundtable called for emphasis on economic and social rehabilitation of returnee women migrants’ workers. They said women workers go abroad with the dream of financial well-being of the family, but the dreams of most of them are shattered in a few days. They are subjected to various forms of physical and mental torture. Even returning to the country these women workers have to be subjected to various forms of harassment. The roundtable titled “Social and Economic Conditions of Returnee Women Migrant Workers Reviewed and Way Forward” was organised by Bangladesh Institute of Labour Studies-BILS on December 26, 2021 at Azimur Rahman Conference Hall, The Daily Star Center, Dhaka.

Member of Parliamentary Standing Committee on the Ministry of Labour and Employment Shamsunnahar Bhuiyan, MP, was present as the Chief Guest at the roundtable while, BILS Advisory Council Member Shah Mohd. Abu Zafar Chaired the meeting and BILS Joint Secretary General Dr. Wajedul Islam Khan acted as a moderator. Speaking as the chief guest Shamsunnahar Bhuiyan, MP, said Bangladesh is becoming a middle-income country on the golden jubilee of independence. As the participation of women at the workplace with men is increasing, so it is the advancement of women in Bangladesh. But it is unfortunate for us that returnee women migrant workers arrive after being tortured in receiving countries. She called for raising awareness among all parties about the social and economic rehabilitation of women workers at the grassroots level with emphasis on training.

Bureau of Manpower Employment and Training (BMET) Deputy Director Zohra Mansoor said, we have a history of failure as well as success. Therefore, in addition to failures, success stories are also needed to be brought up in research. Referring to the issue of employment of returnee women migrant workers , she said that women workers go abroad from a place of unemployment so it is normal to remain unemployed after returning from there. At the same time, she highlighted various initiatives of the government for the socio-economic development of women workers.

Mentioning one of the demands of workers for a dignified life, Sramik Karmachari Oikya Parishad (SKOP) Joint Coordinator Quamrul Ahsan said that, the condition of returnee women migrant workers is just the opposite of the demand for a dignified life. Those who were once able to make family decisions are returning to a more marginalized place in society. In overcoming this, he emphasized on creating awareness as well as creating a database of workers.

Presenting the research report BILS Deputy Director (Research) Md. Manirul Islam at the roundtable, mentioned that most of the dreams of women workers were shattered in a few days even though women workers went abroad with the dream of financial well-being of the family. They are subjected to various forms of physical and mental abuse, such as overwork, regular beatings, sexual harassment, rape, etc. Most of the migrant women workers who have returned from the Middle East after being tortured are returning home empty-handed, many returning mentally ill and many returning physically disabled. He mentioned expatriate women have created a socially negative situation on the labour issue. As a result, after returning to the country, every migrant woman worker whether tortured or not, has to face various unfavorable conditions in the society. They are looked down upon socially and familiarly, and many  of their families broken up. This situation is very painful for a woman worker returning to the country, which disrupts her normal life journey and separates her from social and economic activities.

Others speakers at the roundtable said that special attention needs to be paid in the case of migrant women workers. The actual information of returnee women migrant workers and its continuous review needs to be done. At the same time, the speakers called for the formulation and adoption of appropriate social security measures for women migrant workers; emphasis on appropriate skills development training and job creation; providing loans on easy terms as well as providing appropriate commercial advice; providing appropriate health care, including psychosocial counseling. They called upon the Ministry of Expatriate Welfare and Overseas Employment like the Ministry of Labour and Employment, Ministry of Social Services and other departments to ensure trade union participation in the process of labour registration, awareness raising and monitoring.