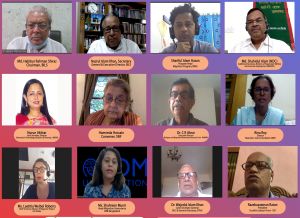 Remittances are one of the two pillars of Bangladesh’s economy and these remittances come through migrant workers. Therefore, the government, trade unions and civil society representatives have called for giving them proper status at home and abroad as well as ensuring legal assistance and compliance in sending workers abroad. The speakers expressed their views at a webinar titled “The Impact of Covid-19 on Migration and Migrant Workers: Reintegration and Safe Return to Work (at Home and Abroad)” organised by the Bangladesh Institute of Labour Studies-BILS on September 19, 2020.

In the key not paper Shariful Islam Hasan said that one crore 27 lakh Bangladeshi workers are working in 84 countries. The country’s economy is in its present position through the remittances sent by them. But migrant workers are returning home after being subjected to various forms of harassment at home and abroad.

He said, almost half of the workers going abroad from Bangladesh are unskilled so the workers are not getting the prescribed work and wages. Further, the cost of sending workers from Bangladesh is higher than in other countries but the workers are not getting wages to match this. Moreover, employment abroad has decreased significantly during the Covid-19 pandemic situation. So, short- and long-term plans need to be adopted for migrant workers. The government and private sectors have to work together for the easy assimilation of the returning workers in the society, he added.

Speaking on the occasion, Md. Shahidul Alam said, although 22 lakh working people are involved in the labour market of Bangladesh every year, about seven lakh workers go abroad for employment. However, there are fewer skilled workers. He mentioned that there is a need to build the skills of the workers through training. For this, he emphasised the importance of including the issue of employment in education.

He also said that the government is exploring new markets for expatriate workers by increasing the scope of training activities. Noting that trained manpower is being sent to strengthen the mission’s activities abroad, he said the scope of protection for the families of migrant workers needs to be increased. He commented that those who send workers abroad need to be brought under compliance. He called on the media to come forward to campaign for the rights of migrant workers, adding that trade unions should also come forward to raise awareness. He also mentioned that it would be helpful to get the information of the returning workers through apps and include it in a national database.

Migrant workers are in a big crisis because of Covid-19, said CR Abrar, the executive director of Refugee and Migratory Movements Research Unit (RMMRU). He added that the workers had gone abroad in compliance with government rules and regulations, so it was important for all parties, including the government, to look into whether they were getting a fair return.

He demanded that the issue of fair demands of migrant workers be raised in the international arena, taking into account international agreements, including the Colombo Process. Considering the dignity of migrant workers, it was necessary to allocate funds for migrant workers as well as private-sector incentives. In this case, the trade unions need to come forward with demands. The workers who failed to go abroad depositing the money should get it back, he added.

BILS joint secretary general Dr. Wajedul Islam Khan said, the workers are not getting what they deserve according to the laws and policies of the receiving countries. He urged all to work to ensure the rights of the workers.

Manusher Jonno Foundation Director Rina Roy emphasised the need to amend laws and policies to protect the quality of life of migrant workers.

Socialist Workers Front President Razekuzzaman Ratan said, we count the remittances sent by the workers but we do not see the issues of their dignity. Noting that employment on the global market is shrinking due to Covid-19, he said, those who have already lost their jobs and returned to the country need to be rehabilitated.

Shahreen Munir, head of Migration Governance, International Organisation for Migration (IOM), said the policy-planning should be bilateral so that effective decisions can be made in its light. Noting that our policy plans need to be adapted to the global plan, she said decisions need to be made regarding research data plus the database needs to be updated.

Leticia Weibel Roberts, the chief technical advisor at ILO Dhaka, said a sustainable reintegration project with foreign returnees is being undertaken by the ILO. If it succeeds, it will be possible to play a more effective role. The reintegration project will also be added to the institutions where the training activities have been undertaken. Returning workers will be able to choose the business modules that will be kept with entrepreneurial projects, she added.

In his welcome address Nazrul Islam Khan said the initiatives taken by the government for remittance fighters in times of crisis are commendable. However, he said the government should now focus on sending skilled workers to the sectors where job opportunities are being created abroad.

In his speech, Md. Habibur Rahman Shiraz said the recommendations that will come up from the discussion will be sent to the concerned authorities so that they can take necessary action.

Presentation 01 : Impact of Covid-19 on Migration and Migrant Workers

Presentation 02 : Impact of Covid-19 on Migration and Migrant Workers