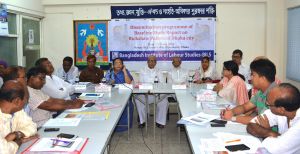 On the initiative of BILS, the publication ceremony of a research report on the life-struggle of the rickshaw drivers of Dhaka city, their needs, contribution in transportation of product and people and their right to organise was held on June 27, 2019 at BILS Seminar Hall, Dhanmondi, Dhaka.

Shirin Akhter, MP said that the City Corporation has to make short and long term plans on rickshaw. In particular, there is a need to quickly and lightly control the vehicles and control mechanized vehicles, she added. Rickshaw drivers humanitarian issues should be considered, she mentioned. Shirin Akhter, MP underscored that Rickshaw pullers have to be organized and in this case, City Corporation should come forward. Political parties have to come forward too, she added.

Shamsunnahar Bhuiyan, MP said that the government has announced a special allocation for Social Safety Net. In this case, the issue of Rickshaw drivers can be raised.

In the welcome speech Md. Zafrul Hasan said, Rickshaw is a very important vehicle for everyone, but rickshaw pullers are constantly being harassed. Their human rights, living standards and legal protection need to get special attention.

The speakers said that the battery-operated Rickshaw was being illegally run throughout the country. The cause of traffic congestion and accidents is due to them. The administration should come forward to stop them. Before banning Rickshaw in the city, alternative employment should be provided for Rickshaw drivers. In this case, Rickshaw drivers need to be organized to get their rights.

They said, Rickshaw drivers need a good life guarantee; they need social movement to ensure their rights as workers. They also said that separate lanes were introduced for Rickshaws but those could not be kept later. They also commented that Rickshaw owners are being harassed like Rickshaw pullers. They also wanted the intervention of the Honorable Prime Minister to consider the Human Rights of the Rickshaw drivers.

In the closing speech, BILS Chairman Habibur Rahman Shiraz said, government policy regarding Rickshaw requires intermediate intervention. Considering the humanitarian situation, it is necessary to make timely decisions. In this case all parties have to be integrated and united. Important decisions can be taken if this matter is presented and discussed in the Parliament, he added.

According to the study, nearly 1.5 million Rickshaw pullers in Dhaka and their families are dependent on the occupation and 60 percent of city dwellers use Rickshaws for commuting, These Rickshaw pullers are deprived of their rights due to a lack of policy, the study said, claiming that the government wants to limit their number without a proper rehabilitation plan.

The study revealed that most Rickshaw pullers living in the city come from northern parts of the country, including 36 percent from Rajshahi and 22 percent from Rangpur. On an average, they earn Tk 13,382 a month. Among them, 54 percent have loans and 94 percent do not receive any assistance. The study also found that 95 percent Rickshaw pullers are harassed by law enforcers, passengers, transport workers and Rickshaw owners. The study also found that 96 percent of them hire Rickshaws on rent from garage owners and 20 percent do not receive any facility from there.

It is also found in the study report that 94 percent of Rickshaw pullers suffer from diseases including fever, cough, pain, weakness, jaundice and diarrhoea, and they go to quacks for treatment or purchase medicine from pharmacies without prescription.