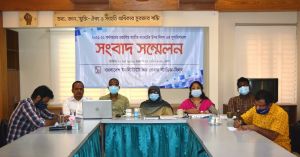 Bangladesh Institute of Labour Studies-BILS organised a press conference calling for increasing the allocation for working people in the national budget for the fiscal year 2021-22. There is also a comprehensive budget plan to create a complete database of working people, with specific budget plans and necessary budget allocations to provide allowance in line with price increases, formulation of a universal pension scheme, re-employment of workers and a full-fledged budget plan to vaccinate workers. The press conference was held at the BILS Seminar Hall and virtually titled “BILS Recommendations on the Proposed National Budget for the Fiscal Year 2021-22” on June 28, 2021.

Presenting the recommendations at the press conference, BILS Deputy Director (Research) Md. Manirul Islam, said that although there were various demands for workers and working people during the COVID-19 period, but they were ignored in the proposed budget. He said that currently the second wave of Covid-19 is going on at its highest stage. There are restrictions on both internal and external. So far, 23 recovery packages worth Tk 128441 crore have been announced, which is about 4.2 percent of GDP. GDP growth has also increased significantly in recent times. In the fiscal year 2020-21, the GDP growth has been 6.1 percent. Even then, the income of the workers has decreased due to COVID-19. Many workers have lost their jobs. They are making a living by spending the deposit money. Many workers are insecure about their jobs. On the other hand, labour migration abroad has also come down significantly to only 2 lakh people a year, compared to an average of 8 lakh people in previous years. In the past few months, many migrant workers have returned to the country because of COVID-19. 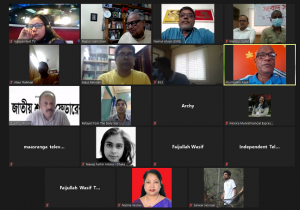 In his welcome speech, BILS Secretary General and Executive Director Nazrul Islam Khan, said that many workers in the formal and informal sectors have lost their jobs due to COVID-19 and other issues including social security should be included in the budget to help them. He said, the proposed budget has neglected the participation of labour representatives in the budget process including employment security, productive employment, social security of workers. He added that there is no guideline in the budget regarding the employment of migrant workers who have returned to the country. He opined that as long as they are not able to join the work, they should be given government assistance and more importance should be given to skill development in order to create new jobs for them.

Speaking on the occasion BILS Advisory Council Member Naimul Ahsan Jewel, said the proposed budget was not a worker-friendly, rather it is business-friendly. Even then, the budget does not have the necessary plans and allocations for small businesses. He said the position of millions of workers has fallen below the poverty line because of COVID-19. He noted that European Union’s fund for the export-oriented industries could not be distributed due to the lack of a database. He stressed the need to have a complete database to assist the workers. He called upon the concerned departments to implement the recommendations of the BILS considering the difficulty of the workers.

The following recommendations, unanimously adopted by the BILS Advisory Council and Executive Council and signed by BILS Chairman Md. Habibur Rahman Shiraz and Secretary General Nazrul Islam Khan, have been sent to the concerned Members of Parliament including the Speaker, Finance Minister, and State Minister for Labour and Employment.