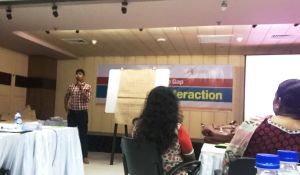 BILS participated in a thematic discussion workshop titled “Building up Inter Relationship between NGO and Media Representatives” organized by MRDI on May 23, 2017 at A.S. Mahmud Seminar Hall of The Daily Star office in Dhaka.

The objective of the session was to strengthen information flow between media, CSOs and the government for investigative journalism. CSO and government representatives working in the area of Corruption, Labour Rights, Gender Equality and Climate Change and the Reporters of national media of these bits participated in the workshop. On behalf of BILS, Information Coordinator Md. Yousuf Al-Mamun participated in the workshop.

It was expected in the workshop that these sessions would facilitate CSOs and relevant government bodies to build up effective relationship with the media houses, which would eventually create conducive environment for investigative journalism. It was also expected that the workshop would also create opportunities to further understand between NGOs and Media, their specific roles and responsibilities.

It may be mentioned that MRDI partnered FOJO Media Institute, Linneaus University, Sweden in a 5-year project ‘Improving Qualitative Journalism in Bangladesh’ with an objective to facilitate the Media in Bangladesh for contributing to strengthen Democracy, Gender Equality, greater respect for Human Rights and freedom from oppression.