A discussion meeting was organised by BILS titled “Activities and Forward of Bangabandhu : Dignity and Rights of Working People” on observation of National Mourning Day on August 18, 2018 at BILS Seminar Hall. 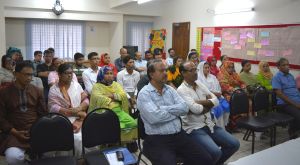 Discussants in the meeting discussed about the ideology and contribution of Bangabandhu to improve the workers’ life and protect their social dignity as well as rights.