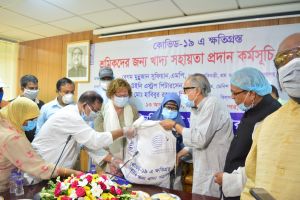 At present, there is an outbreak of Coronavirus all over the world, the wave of which has reached Bangladesh as well. It is affecting people’s livelihood, health, medicine, industrial production, economy and everything else. Economic activity has largely stagnated. The livelihood of working people has been damaged. To stand by the affected workers during the COVID-19 pandemic situation, Bangladesh Institute of Labour Studies-BILS, with the help of the Danish Trade Union Development Agency (DTDA), has taken the initiative to provide food assistance to 2,400 workers in various sectors of the Dhaka and Chattogram City Corporation area.

The inaugural programme of the food aid program was held on Thursday, August 13, 2020 at 3.00 pm at the Srama Bhaban (The Headquarters of the Department of Labour and the Department of Inspection for Factories & Establishment) located at Bijoynagar in Dhaka city. Hon’ble State Minister for Labour and Employment Begum Monnujan Sufian, MP was present as the chief guest at the inaugural function presided over by BILS Chairman Md. Habibur Rahman Shiraz. Danish Ambassador to Bangladesh Winnie Estrup Petersen was present as distinguished guest. Inspector General of the Department of Inspection for Factories & Establishment Shib Nath Roy, BILS Secretary General and Executive Director Nazrul Islam Khan, Joint coordinators of SKOP, Fazlul Haque Montu and Naimul Ahsan Jewel and other leaders of the National Trade Union Federations were present on the occasion among others. 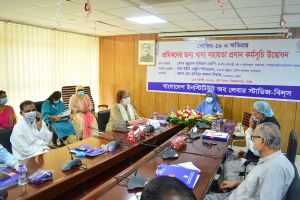 Begum Mannujan Sufian, MP, said that the food aid provided by BILS with the help of DTDA would be helpful to the working people. Noting that the Danish government had unwavering support for Bangladesh in the war of independence, the state minister said the issue was always reflected in all the cooperation of the Danish government. She mentioned that Bangladesh will never forget the cooperation of the Danish government. Appreciating BILS’ education and training activities for working people, the State Minister said BILS has always been working to build the capacity of trade unions. 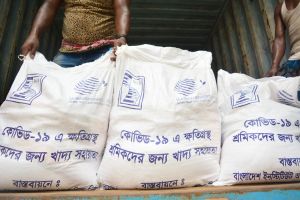 Winnie Estrup Petersen praised DTDA for its support and said that the Danish government always wants to be by the side of the working people of Bangladesh. She said the Danish government and trade unions always welcome the tripartite initiative to resolve the labour crisis in Bangladesh and would like to extend all possible cooperation in this regard. She hopes that all working people will be able to return to work successfully after the ending of COVID-19 pandemic situation.

Nazrul Islam Khan said that BILS was able to complete the food aid programme successfully with the help of DTDA. He thanked DTDA for this.

Welcoming the initiative, Fazlul Haque Montu said that the limited amount of food aid provided by BILS with the help of DTDA would alleviate the plight of the workers to some extent and other organizations were expected to come forward.

In his speech, Md. Habibur Rahman Shiraz expressed his gratitude for the initiative of DTDA and said that he was confident that the Danish trade unions and the government would continue to extend this assistance to the working people of Bangladesh in the future.

This is to be mentioned that BILS has been working for the last 25 years to build up trade union capacity in a view to assist in formulating labour-friendly policies, labour laws etc. to ensure the rights of working people, build sound industrial relations, ensure occupational health and safety of workers, and facilitate social dialogue between employers, trade unions and government.