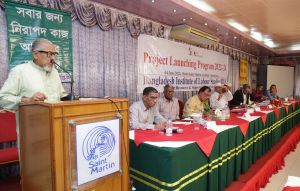 An audio-visual presentation was done on the BILS-LRSC activities under the project by BILS program officer Rizwanur Rahman Khan at the beginning. Through the presentation, BILS-LRSC 2016-2018 and 2019-2021 phase accomplished activities and achievements were displayed. Besides, 2022-2024 planned activities were also briefed in short.

In his speech Chief Guest Nazrul Islam Khan said, though the workers of our country played a pivotal role in the national development and economic growth, in most cases, they are right-deprived. In terms of wages, leave, working-hour, overtime, and other law-covered benefits, workers are being deprived every now and then. So, we have to work for the betterment of Bangladeshi workers at home and abroad.

In his speech as a special guest, FES-Bangladesh office Resident-Representative Felix Kolbitz expressed his hope that efforts to make workers right-conscious will continuously be done by BILS and the German cooperation in numerous BILS activities will continue in near future.