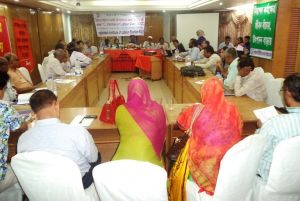 A meeting titled “Consultation with Divisional and Sectoral Level TU, Member of Labour Court & TCC” was organized by BILS LO-FTF Project on August 7, 2017 at the Seminar Hall of Hotel Asian SR, Chittagong.

Speakers in the discussion said, the Labour law and labour rules are needed to be amended with a view to reduce discrimination at workplace, reform recruitment procedures, improve overall working condition in the informal as well as vulnerable sectors, assuring workers safety and rights, for standard living wages of working class and promoting socio-economic welfare and justice for them.