May Day 2020: Roundtable held on”Covid-19: Situation of Working People, Challenges and Way Forward to the Future of Work” 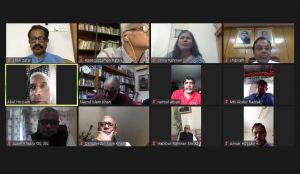 Bangladesh Institute of Labour Studies-BILS, with the technical support of The Daily Star organized an online roundtable titled, “COVID-19: Situation of Working People, Challenges and Way Forward to Future of Work” on April 30, 2020 on the observation of May Day.

BILS Chairman Md. Habibur Rahman Shiraz chaired the roundtable while BILS Secretary General and Executive Director Nazrul Islam Khan was present as Moderator and delivered the welcome speech. In the roundtable, Inspector General of the Department of Inspection for Factories and Establishments Shib Nath Roy and Professor of the Department of Development Studies at University of Dhaka Dr. Rashed Al Mahmud Titumir were present as chief discussants respectively in two sequential sessions.

In his welcome speech Nazrul Islam Khan Said, in the current situation of COVID-19, all the border areas of the world are closed; global supply chain has stalled, with the declining of oil consumption the price of oil has reduced. In Bangladesh cure rate is lower than the infected rate, which is totally opposite to China. In this pandemic situation, the working people are the more sufferers. We are only responding reactively to RMG sector, whereas we are not discussing or taking decision with other sectors. If DIFE had formed a tripartite task force, then it would have been possible to get the opinion of the workers. So, considering the current situation all of us have to come forward to implement all the measures taken by the government for the welfare of the working people. Praising the initiative by ILO Director General Guy Rider to urgently sit together with brands, buyers, government, owners and trade union leaders to save the RMG industry, Nazrul Islam Khan mentioned, it is possible by using the spirit of recovering the industry after Rana Plaza disaster.

Mentioning various initiatives of government in the discussion of chief discussant Shibnath Roy said, workers are the most victims in this Corona situation. We have to think of the way to spend the amount of Workers’ Welfare Foundation for their welfare, he said. Moreover, Trade Union leaders have to discuss with government in case of getting aid for the workers from welfare fund. Mentioning the protection of the workers who have already come to workplace as a big challenge he said, sufficient safety has to be ensured in those factories which have been opened. An instruction was given to the inspectors, industrial police and BGMEA regarding this.  Mentioning the factories would be opened sequentially he added, factory owners had said not to bring the workers from outside of Dhaka. They have confirmed of avoiding discharge and lay-off. He mentioned, owners had confirmed about the payment of the workers, but till April 29 1 lac 1 thousand 70 workers of 422 factories did not get their salary of March. He mentioned, Deputy Commissioners are working to reduce the food crisis. He opined, it is necessary to try to sustain the procurement under the task force in order to save our garment industry.

Dr. Rashed Al Mahmud Titumir said, the rate of unemployment is already high in our country, now this rate will increase more because of Corona. Besides, he expressed his concern with the further weaken situation of the economy as the declining remittance sent by the expatriates.  He opined to take initiatives for special allocation in the next budget for ensuring workers protection, short and long term planning, taking permanent social safety programme and in line with this arrangement of health card by changing the present situation of national health system to deal with Corona. He mentioned, it is possible to save the working people as well as our economy by spending 10% of GDP of our country in this COVID-19 situation. Besides, he emphasized on creating green development fund for the future fuel.

Dr. Hameeda Hossain, Convener of Sramik Nirapotta Forum-SNF said, demanding more emphasis on the role of Trade Union for overcoming Corona nad protecting workers she said, not only the RMG workers, we have to think about the workers of other sectors. The workers have been benefited if they had been accommodated close to the factories that are been opened. This will protect them from being affected.  Besides, mentioning gender based violence in this lockdown situation she urged to think of the way for protesting gender based violence against women. A list of workers can be prepared with support of Trade Union, she added. Mentioning the necessity of distributing ration card by government she said, the activities of relief distribution should be monitoring properly.

Mesbahuddin Ahmed, President of Jatiya Sramik Jote & Member, Advisory Council, BILS said, health sector needs much more development. For this reason more investment is needed in this sector. If farmers can be helped more by providing more incentives in the agriculture sector, then it will be possible to overcome the food crisis after Corona, he opined.

Shah Mohd. Abu Zafar, President of Bangladesh Labour Federation; Member, Advisory Council, BILS & Member, Bangladesh Labour Welfare Foundation said, workers are unable to run more than 10-15 days by fulfilling all the demands of their family members with the wage as they get by working 8 hours. They are much more far away from the spirit of great May Day. If government provides incentives in line with the market price then the workers will be benefited. The relief allocated for the workers are being distorted. So there should be present sector based workers’ representative in each district to reach the relief to the workers properly. Besides, government can engage army for the proper distribution of the relief as the working people will be more benefited in case of getting aid. He urged to government for taking actions against the owners of the factory and revoke their license if necessary who are not paying due wages to the workers.

Anwar Hossain, President of Bangladesh Jatiyatabadi Sramik Dal & Vice Chairman, BILS mentioned, it seems RMG workers are moving like refugees during liberation war of 1971. He urged, everyone must be given benefits through the equal distribution of incentives that declared by the government for the survival of the working people.

Mentioning the effective implementation of all the declaration from the government Dr. Wajedul Islam Khan, General Secretary of Trade Union Centre & Jt. Secretary General, BILS said, factory owners can solve all the problems by negotiate with the workers representatives. He urged to take necessary initiatives to pay due wages and bonus to the workers before Eid-Ul-Fitr and provide government aid. He also urged to draw the attention to the workers of informal sector for ensuring their relief assistance. He proposed to the government to make a total package for the workers that will reduce their sufferings.

Razekuzzaman Ratan, President of Samajtantrik Shramik Front emphasized that migration sector is now in threat. Bangladesh imports more and exports less, and the gap is fulfilled by the remittance from migration sector. Migration is the single largest remittance income sector of Bangladesh. Every year 22 lac job seekers enter the job market, majority of this number are accommodated by this sector. With this present crisis of COVID-19, new job generation in migration sector will stop, migration remittance will reduce as well as investment of individual in migration sector will decrease. To cope up this situation, recruiting agency need to be guided and regulated, migrants’ welfare fund should be explored for skill development, IT skills need to be emphasized, ‘zero migration cost’ should be introduced and most importantly budget should be re-allocated for this sector.

Describing the inhuman lives of 40 lac shop keepers Naimul Ahsan Jewel Joint Convener of SKOP & Member, Advisory Council, BILS said that, they are deprived from the right according to Labour Law as they do not have identity card and appointment letter. Trade Union leader should take initiatives to support them and change their condition.

K M Azam Khasru, General Secretary of Jatiya Sramik League said, Corona is not a local crisis; it is a global crisis, so in this crisis moment we have to stand beside the workers from our own position.

Mentioning the risk of the lives of garment workers for collecting their due wage and saving their job Chaina Rahman, Secretary General of IndustriAll Bangladesh Council-IBC said that, the garments owner should stop discharging and lay-off and determine the salary of the garments workers considering their families. Besides, the workers have to work in this disaster then the workplace safety should be ensured by the owners for the workers and safety equipments have to be provided.

Sohrab Hossain, Joint Editor of Prothom Alo said, workers who did not get their March payment are protesting on the streets. Because, hunger is the bigger issue for them than Corona. He also said, transport leaders did not stand beside the starving workers. In this case, government should take necessary measures. It is now more important to provide cash assistance the poor. Mentioning the declaration of lay-off by imposing the liability on the workers as unfair he said, the wage of 40 Lac workers in RMG sector is so low that is impossible for them to lead their life, in this situation their harassment will be increased.

Md. Abdur Razzak, General Secretary of Imarat Nirman Sramik Union Bangladesh said, 37 lac construction workers in our country have become unemployed. As they are not organised and they do not have permanent job, so they are being deprived of government relief aid. He urged to Labour Ministry for monitoring the crisis committee and mentioned the rules and regulations in case of providing relief to the construction workers. Besides, he urged to the Labour leader for standing beside the workers to implement all the declarations from the government immediately.

Mentioning the government declaration of the package amount of 7 thousand 500 Crore taka Insur Ali, General Secretary of Jatiya Rickshaw-Van Sramik League said, there is no direction for the workers to collect this money. There is also inequality in area based relief being provided.  He urged to government to help the workers out of the voter list according to declared package.

Chair of the roundtable Md. Habibur Rahman Shiraz said, the Prime Minister has taken various initiatives to face the Corona crisis. She declared taka 5 thousand crore as incentive for the workers that they can get their salary.  Still now, workers are struggling and as a result taking part in the movement demanding their wages. Regarding this, it is necessary to find out the responsible person and take action against them, he added.