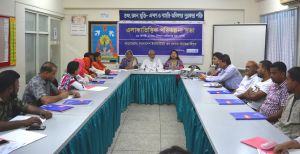 BILS, with the support of Mondiaal FNV organised area based planning meeting with the participation of Trade Union Leaders of Tongi-Gazipur area on August 29, 2018 at BILS Seminar Hall.

Main objectives of the meeting were to coordinate area based committees regularly, to contribute in protesting violation of workers’ rights and gender based violence at workplace through the implementation of social activities and active participation in social dialogue.

Forming Union in garments sector, identifying challenges of Trade Union, organising social programmes as well as social dialogue and protesting gender based violence at workplace were the discussed issues in the meeting. A keynote paper on  activities of BILS-FNV project was presented by BILS Programme Officer Syaduzzaman Mithu.