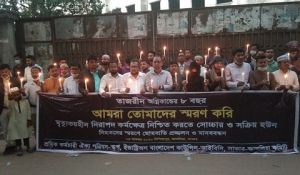 Speakers at a rally said, workers and their families affected by accidents at various workplaces across the country, including Tazreen and Rana Plaza, would be compensated on the basis of ILO Convention 121 and the Serious Accidents Act 1855 and Adequate compensation should be given to the affected workers on the basis of loss of lifelong income of the workers and considering the compensation given by the court order in various accidents.  To this end a national standard of compensation must be created.