All workers must be brought under social security 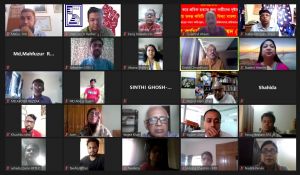 Representatives of trade unions and development agencies have demanded that measures be taken to ensure occupational health and safety, including social security for workers during the COVID-19 period. Speakers expressed their views on a webinar titled “Occupational Health and Safety during Covid: Reality and the Way Out”. the occasion of National Occupational Health and Safety Day 2021 Safety and Rights Society-SRS, Bangladesh Legal Aid and Services Trust-BAST, Bangladesh Institute of Labour Studies-BILS, and Sramik Nirapottya Forum-SNF organised the webinar on April 29, 2021.

BILS Secretary General Nazrul Islam Khan said that there was a movement on May Day to fix eight hours of daily work time. Referring to the issue of compensation to the bank officials affected by the Corona, he said that such benefits should be added for the workers who are keeping the wheel of the country’s economy during the covid situation.

Called for ensuring decent working environment in all cases, SRS Executive Director Sekendar Ali Mina said that everyone should work together in this regard. He added that the views and approaches of the labour partners may be different but they need to have confidence in each other to achieve the main goal. He called for measures to be taken to ensure occupational health and safety, including social security for workers during COVID-19.

Mentioning the challenge of ensuring safe working environment in Corona, Bangladesh Trade Union Center General Secretary Dr. Wajedul Islam Khan said, first the lives of the workers have to be saved. If the workers survive, the factory will survive. For this, it is necessary to make arrangements to provide quick financial assistance to the workers from the Workers Welfare Foundation.

BLAST Deputy Director, Md. Barkat Ali, said the law was being amended to include provisions on social security for workers so that workers would not have to suffer extra in an pandemic like COVID. He further said that the declared social security opportunities for the workers should be given to the workers.

Referring to various initiatives of the government, Department of Factory and Establishment Inspection, Rajshahi Deputy Inspector Mahfuzur Rahman Bhuiyan, said that the officials of the department were inspecting the factories at the risk of their lives, even after the offices was closed in Lockdown. He said that at the initiative of DIFE, work is being done to set up separate booths for corona vaccine in each factory. At that time, he requested the workers to contact the hotline of the department.

Sramik Karmachary Oikya Parishad (SKOP) Representative Quamrul Ahsan, said that although everything was closed at the lockdown, the factory was declared open in accordance with the health rules, but no arrangements were made for the workers to comply with the health rules or travel. He called upon the government to take initiative to solve the problems of the workers through the crisis committee.

Mentioning that health is the root of all happiness, NCCWE Member Secretary Naimul Ahsan Jewel said that if the health of the workers is not good, if they do not work properly, the production system of the factory will also be interrupted. He demanded to increase the allocation in the health sector in the coming budget.

In the keynote paper presenting at the meeting, SRS Program Officer Sinthi Ghosh mentioned that workers are most affected by the Corona situation. Many workers have lost their jobs, and many have lost their wages. He said that he was working under lockdown or strict prohibition during the coronation period but if he was deprived of his rights for any reason, he could not get any chance of redressed and could not go to court as the court was closed.