Enhancing the TU leadership capacity is the main objective of the training. Separate issue-based sessions were conducted during this 3-days event including a panel discussion. Different NTUC’s leaders are attending the training. All participants were awarded with BILS certificates for successfully concluding the training. 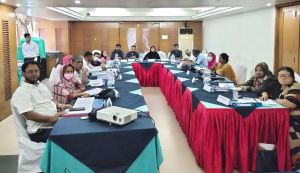 On the opening day BILS Program officer Rizwanur Rahman Khan briefed the participants on the aim and object of this training program. Then, BILS Director and Project Coordinator Kohinoor Mahmood conducted a session on “Future Trade Union Challenges: Role of Activists”. Then, a session on “Labour Scenario: Recent Appointment Tendency, Gig Economy & Outsourcing” was conducted by Assistant Professor of the department of the Social Work Mustafiz Ahmed. Another session on the “4th Industrial Revolution” was also conducted by him.