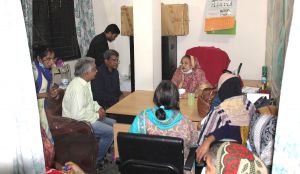 On the occasion of 16 Days of Activism against Gender Based Violence 2021, a discussion meeting was held on December 7, 2021 at the reserved women councilor’s office in ward no. The event was organized in collaboration with Global Affairs Canada and Oxfam in Bangladesh.

Minu Rahman, Reserved Women Councilor of ward no. 08,09 & 10 spoke on the occasion. He called for an end to inhumane treatment of domestic workers. Encourage the domestic workers present to be aware of their rights. He called on the people to support the victims of the ongoing violence. He also said that if any domestic worker of this ward has ever been the victim of any kind of abuse, they must report it to his office and he will co-operate with them in this regard. Siddika Mahal, representative of Apex Body of Suniti Project in human Chain, said that the government has formulated a policy for domestic workers in 2015, and sought the cooperation of all in the proper implementation of this policy. He demanded that domestic workers be included in the labor law. Apex Body representative Mumtaz Begum demanded ratification of ILO Convention 189 by the state and called for proper implementation of the law to prevent torture. A rally was held at the end of the human chain.

After the human chain, a meeting was held in the presence of eminent persons of the area, network leaders, domestic workers and reserved women councilor Minu Rahman to create awareness about the abuse of domestic workers and to prevent abuse. The meeting informed the ward councilor about the activities of the project and invited him to visit the training center. At the meeting, he said that demands should be raised to the government, domestic workers should be given the right to life. He said that the government should demand the construction of housing / dormitories for the domestic workers so that they can be safe in their homes. The meeting was attended by Md. Enamul Haque Khan Taposh, Program Coordinator of CAMPE, Md. Yusuf Al-Mamun, Deputy Director and Project Coordinator of BILS, Chowdhury Borhan Uddin, Senior Advocacy Officer, Siddique Mahal and Mumtaz Begum, Network Leaders.