On the occasion of 16 Days of Activism against Gender Based Violence 2021, a discussion meeting was held on December 1, 2021 at Meradia South Banasree Building Construction Workers Union Bangladesh-INSUB office and a human chain was held in front of the office. The event was organized in collaboration with Global Affairs Canada and Oxfam in Bangladesh. 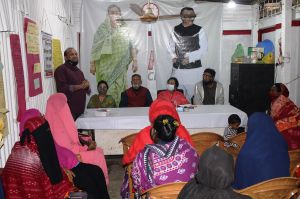 firm stand against physical and mental abuse. If any domestic worker of this ward has ever been the victim of any kind of abuse, they must complain to his office and he expressed his determination to co-operate with them in this regard. Saiful Islam Khokon, president of INSUB, said BILS had conducted similar awareness campaigns before, and that workers had benefited from it, they had learned to speak for themselves and learned to seek rights. He hoped that such activities in the area would make the workers more active in realizing their rights. Also present on the occasion were Ataur Rahman Himu General Secretary, INSUB Khilgaon Thana, Women Leader Farida Akter, Liza Khan and others.