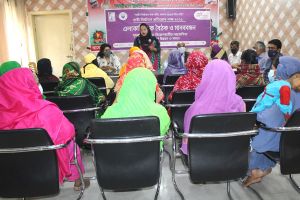 On the occasion of 16 Days of Activism against Gender Based Violence 2021, a discussion meeting was held on  November 30, 2021 at Takkipara, Baitus Salah Market Complex, 29th, 30th and 32nd Ward Commissioner’s Office. The event was jointly organized by Bangladesh Institute of Labour Studies- BILS and Campaign on Popular Education (CAMPE) under Suniti Project run in cooperation of with Oxfam in Bangladesh and Global Affairs Canada.

Shaheen Akhter, a member of the council, spoke at the meeting. He said that the purpose of attending the discussion was to inform the domestic workers, whose rights would be realized by the authorities. Every housewife should know about her rights and be vocal in realizing her rights. She further said, I will take action ‘. He did not tolerate the silent harassment of the domestic worker and did not emphasize the importance of taking preventive measures by informing the concerned. During the discussion, Abdul Wahed, a member of apex body formed by Suniti Project and member of the BILS Executive council strongly demanded the government to implement the Domestic Workers Protection and Welfare Policy 2015 and to enact legislation for domestic workers.Rehana Begum, Deputy Program Manager, CAMPE said that- “If domestic workers develop skills in their profession, violence & harassment upon them will go down”. Humaira Begum, the organizer of the Domestic Workers’ Rights Network (DWRN), said: “We feel [proud to become acquainted with our Ward commissioner and we hope in case of any violence and harassment we will get her help”.  Md. Yusuf Al-Mamun, Deputy Director and Project Coordinator of BILS, Md. Enamul Haque Khan Taposh of Program Coordinate, CAMPE was also present at the discussion meeting.

At the end of the discussion, a human chain was held with the participation of the domestic workers’ led by the Ward Councilor. Among others Chowdhury Borhan Uddin, Senior Advocacy Officer, BILS Suniti Project, Kamruzzaman Fahim, Monitoring Officer, Khaled Bhuiyan, Project Assistant and Mokshdur Rahman, Program Officer, CAMPE were present at the human chain.