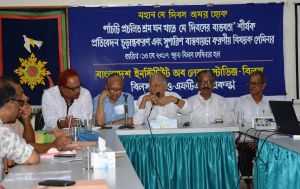 BILS organised a seminar to finalise report aimed at implementing recommendations titled “Spirit of May Day in five Common Labour Sector” on May 13, 2017 at BILS Seminar Hall. The main objective of the seminar was to finalise the survey report and to discuss about way forward for the implementation of recommendations. A key note paper on “Spirit of May Day on Five Common Labour Sector” was presented in the seminar.

Discussants in the seminar recommended to research elaborately on mentioned topics in research, to make necessary legal framework and implement it for ensuring labours’ wage and bonus, to take initiative for ensuring eight hours as working hour in a working day, to work for ensuring wage and appointment letter, to strengthen Trade Union movement based on results of such type of study in different sectors.