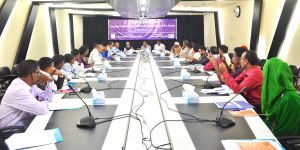 Analysing the present situation of tea workers’ rights and social security, creating advocacy strategies for formulating policies aimed at making positive changes in their quality of life are the main objectives of the programme.

Speakers at the roundtable said, tea workers are still victims of discrimination, just as they had been during British rule. Without improving workers’ living standard, the goal to become middle income country cannot be achieved, they added. They demanded permanent residential facilities for tea workers. The workers’ children have been deprived of primary education due to lack of schools near their residence, they underscored.