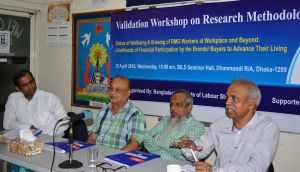 BILS, with the support of Friedrich-Ebert-Stiftung (FES) organised a meeting for dissemination research report titled, “Core Labour Standard Plus (CLS+) : Linking of Trade and Decent Work in Global Supply Chains in Bangladesh” on April 26, 2018 at BILS Seminar Hall.

Exploring the link between trade and labour standards in Bangladesh’s RMG sector as well as footwear sector are the main objective of the study. Institute of Bangladesh Studies at Rajshahi University Professor Dr. Jakir Hossain presented a keynote paper on the research where he explained the three types of certification such as legislation, core labour standards and noncore labour standards which are necessary to export any product from Bangladesh to abroad.

Discussants in the meeting took decision on translating and publishing the research report in Bengali for better understanding of national stakeholders. They recommended to sensitize National and Trade Union Leaders about the core labour standard situation  in RMG & Footwear  sectors in Bangladesh and Identify the role and responsibilities of trade union leaders  for way forward