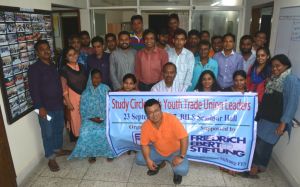 BILS, with the support of Friedrich-Ebert-Stiftung (FES) organised a regular thematic discussion programme for youth organisers of National Federations on September 23, 2017 at BILS Seminar Hall.

The programme was conducted aiming to create a group of skilled and promising organisers in labour movement, those who will play an effective role in the development of living standards of working people and protecting their rights through their active contribution in self organisations and labour movement.