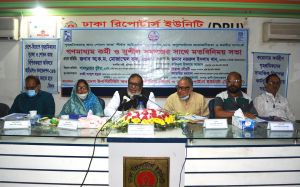 Domestic workers are deprived of their rights and are being tortured in many ways. In order to ensure their rights and dignity, their recognition as workers and to organise them as skilled manpower, it is necessary to ratify ILO Convention-189. Speakers said this in a discussion meeting titled “Importance and to-do for ratification of ILO Convention-189 on decent work for domestic workers”. With the support of International Labour Organisation-ILO, BILS and Dhaka Reporters Unity-DRU Jointly Organised the meeting on November 2, 2020 at DRU Sagar Runi Conference Hall, Dhaka.

In his speech as chief guest Liberation War Affairs Minister A K M Mozammel Haque said, “Bangladesh was the President of the conference on ILO Convention-189, which was adopted there. As such, we have a greater responsibility to ratify the Convention”. He said most of the rights of domestic workers could be ensured only by recognizing them as workers. Recognition as a worker will guarantee their identity card, wages, working hours and working environment. Referring to the rights of everyone as citizen in the constitution, he said everyone should be aware and vocal in preserving the constitution and implementing the basic human rights.

The keynote paper mentioned that according to the BBS LFS 2016-17, the number of domestic workers in the country is 13 lakh and according to the ILO, the number of domestic workers in Bangladesh is about 32 lakh, of which 80% are women and more than 8 lakh are employed abroad. They are sending huge remittance to the country without any recognition as workers. However, various types of harassment and torture are constantly happening with them.

The keynote paper also mentioned that according to BILS Survey, in 2019, a total of 51 domestic workers were subjected to various forms of torture across the country. 17 of them were killed. The condition of women workers going to work abroad is more miserable. Every year a large number of women workers from Bangladesh go abroad, most of them as domestic workers. In 2019, 62,000 women workers went to Saudi Arabia alone. According to the Expatriate Welfare Desk at the airport, 410 women who went to work in different countries in the four years from 2016 to 2019 have returned home as corpses. Of these, 153 people lost their lives in Saudi Arabia. 39 of them committed suicide and 69 died in the accident – the cause of which is unknown or not mentioned anywhere. Since no sending or receiving country has ratified the ILO Convention-189, these workers will not receive justice or compensation anywhere, even can’t claim.

ILO Convention on Decent Work for Domestic Workers-189 was adopted at the 2011 ILO Conference. So far, a total of 30 sending and receiving countries have ratified the Convention. Although Bangladesh has signed the convention, it has not ratified it yet.

Shamsunnahar Bhuiyan, MP, said, domestic workers are being victimized mostly by educated people. To change this situation, everyone’s attitude must be changed. She called upon the journalists to play a leading role as a mirror of the society for this.

Shahidullah Chowdhury said, it is not possible to ensure the rights of domestic workers without organising them. So they have to be recognized as workers and given the right to form trade unions.

DRU President Rafiqul Islam Azad said that most of the conditions of the ILO Convention are met if the domestic workers are considered as human in mind. Only by treating them humanely it can be possible to ensure the decent work of domestic workers.

Mentioning that the ILO has to put pressure on the government to ratify ILO Convention-189, Abul Hossain said that the rights and dignity of domestic workers cannot be ensured without a strong movement.

In his speech, Nazrul Islam Khan said, ILO Convention-189 has been adopted for the protection of domestic workers. They are deprived of their rights and are being tortured in many ways. It is important to ratify ILO Convention-189 to ensure their rights. Ratifying it will ensure the safety of women domestic workers not only in the country but also abroad.