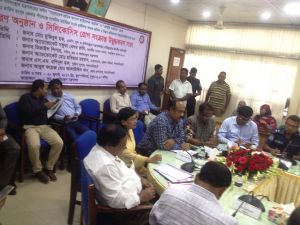 An opinion sharing and discussion meeting was organised on July 20, 2017 at Deputy Commissioner’s Conference Room in Lalmonirhat district. The meeting was organised for raising awareness at local level to protect occupational health of workers engaged in stone crushing industry at Burimari and setting role of concerned all.

The State Minister suggested workers to use musk at their working time and declared to provide musk from Labour Ministry. Besides, he committed to set up hospital for workers with the support of Labour Welfare Center where workers will get free treatment. He ordered officials of DIFE for monitoring the factories located at Patgram.