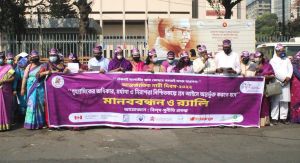 Trade union leaders have called for the inclusion of domestic workers in labour law to ensure their rights, dignity, and security. They placed this demand at a human chain and rally organized by BILS Securing Rights Project on March 8, 2022 at Shahbagh on the occasion of International Women’s Day 2022.

Speakers at the human chain said that incidents of torture, killings and human rights violations against domestic workers have increased alarmingly in recent years. They claimed that domestic workers should have fair rights and right to dignity as human beings. Therefore, they demanded the implementation of the ‘Domestic Workers Protection and Welfare Policy, 2015’, through the protection and welfare of domestic workers, above all, with establishing their dignity, protecting from torture and violence, and ensuring fair wages, compensation, and decent working environment. 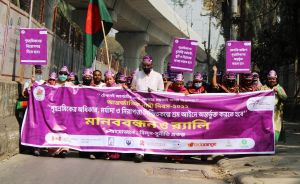