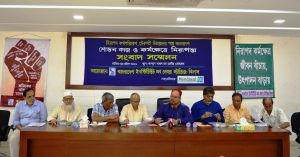 In the written statement it is said that being one of the source of export earnings of Bangladesh, the garment industry contributes 18 percent to the GDP of the country and 83.44 percent of the export earnings comes from the ready-made garment industry last year. So to save the industry and sustainable development, it is necessary to ensure workers living wages, safe workplace and workers’ dignity. It is said in the written statement that in sub-contract factories, garment workers are working in a highly risky environment. Although many factories have infrastructural changes, but inner work environment are largely unchanged. 22 percent women workers of this sector are still being physically and mentally abused. Apart from this torture, other problems such as lack of clean drinking water, unhealthy environment, lack of adequate light-winds, adverse environmental conditions etc. make the workers’ workplace vulnerable.

After the Rana Plaza accident, there was an expectation of Labour Law amendment. However, in the current amendment there was no proper reflection of the workers’ interest, the press conference said. Referring to the EPZ Act, the speakers said that there is no concurrence to have two labour laws in the same country. The speakers demanded the withdrawal of false cases filed against the trade union leaders of garment industry. Besides, the demand was placed for maintaining the garment workers’ database under the government initiative instead of keeping it under BGMEA and BKMEA.

According to BILS newspaper survey, 3 workers were killed and 18 injured in the accidents in the garment industry in 2018. In spite of the lower number of accidents, there has been an increase in the number of violence against workers in this sector, which is counted as 110 cases, including 26 tortures, 21 murders, 11 rape and 9 gang rapes. In addition, 123 workers unrest happened in the garment industry in the year 2018 and 298 workers were injured in the clashes. For demanding wages, 54 workers unrest happened. Labor dissatisfaction also arises in the protest of workers’ death, closure of factories, fair wages and labor rights.

It is to be noted that International Commemoration Day is celebrated every year in memory of the dead and wounded workers in various professional accidents. In order to ensure safe, healthy and dignified work environment, Bangladesh also observes this day with special emphasis as part of International Campaign.