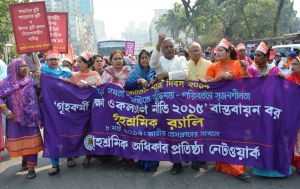 On the occasion of International Women’s Day 2019, Bangladesh Institute of Labour Studies-BILS and its different networks associated with a number of workers’ rights organizations, organized human chain and rally in front of the National Press Club on March 8, 2019. Keeping in front the slogan titled ‘Implementation of the policy and enacting the law in order to safeguard the rights of domestic women workers’, those events were arranged throughout the day in the capital, where leaders of human rights and labour rights organizations of different areas and more than two hundred domestic women workers were present.

In the rally, the speakers demanded to ensure the protection and welfare of domestic workers, their dignity, prevention against violence, fair wages, compensation and decent work environment in line with the ‘Domestic Workers Protection and Welfare Policy 2015’. They also demanded to enact a law based on the policy. 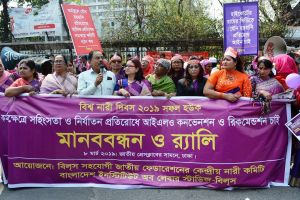 Another human chain and rally were held in the initiative of the Central Women Committee of BILS associated National Trade Union Federations on 8 March, 2019.

Prior to the initiative of the Gender Platform, a candlelight vigil was organized in front of the National Press Club on March 7, 2019, from 5pm to 6pm.

To observe International Women’s Day-2019, BILS, with the support of DGB-BW organized a rally and a discussion meeting on 8th March. More than 200 women participants from various TU organizations gathered at the DC Hill, Chattogram premises and a colorful rally was  brought out. The rally covered some major roads/highways and ended at Cheragi Pahar, Chattogram.