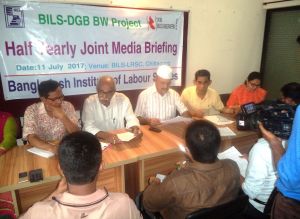 To inform media about the ongoing and completed activities of BILS DGB BW, an Half Yearly Joint Media Briefing was held on 11 July 2017 at BILS-LRSC, Chittagong.

BILS-DGB BW Center Coordinator A M Nazim Uddin said that Chittagong city is different for its industrial belt-ship breaking and port. Due to continuous lobby with stakeholders, the conditions of different sector workers are improving gradually.

Trade Union Centre Chittagong General Secretary Mosiuddoula said that if the industries would not run properly the economic development of a country stalled. To run an industry, the owners need to prioritize the well-being of workers. Unfortunately, owners are hostile to provide workers their due facilities as well as the workers are living inhuman life for years after years, he added. He suggested media to run more labour rights reports to improve the present condition of workers.