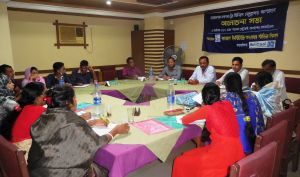 BILS, with the support of  FNV organised a follow up discussion meeting with Narayanganj area Trade Union Leaders on October 18, 2017 at Royal Palace Restaurant, Dholaipar, Jatrabari in Dhaka.

The meeting was organised aiming to take decision for ensuring extra overtime allowance to the workers, providing all kinds of maternity benefits to women workers according to Labour Law, forming a committee with the coordination of owners-workers to take effective initiatives for protesting sexual harassment at workplace. Besides, participants of the meeting planned for different activities to recall five year of Tazreen Garments fire accident.