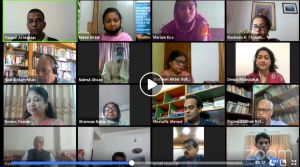 Representatives of trade unions, civil society, human rights and development organizations and the media have called on policymakers and the government to ensure the social status and safety of domestic workers through training, employment and legal recognition, and to strengthen their social security in the COVID-19 pandemic situation. This demand was made by the speakers at an online seminar (webinar) in the morning of June 25, 2020 (Thursday) on the occasion of International Domestic Workers’ Day 2020 organized by Securing Rights (Suniti) Project and in technical collaboration with The Daily Samakal.

Rasheda K Chowdhury said that full implementation of the Domestic Workers Protection and Welfare Policy is needed. If this cannot be implemented, it is not possible to establish the rights and dignity of domestic workers. A legal framework is needed for this, she added. She also said it was important to focus on improving the professional quality of domestic workers by providing them with certificates through proper curriculum development and training as well as changing the mindset of employers.

Shamsunnahar Bhuiyan, MP, said 75 per cent of the country’s workers are unemployed during this COVID-19 pandemic situation. The workers are living a very miserable life. Many domestic workers worked part-time. Most of them have lost their jobs now. It is important to bring domestic workers under its purview by increasing government social security funds.

Razekuzzaman Ratan said the invisible Corona has made the absence of domestic workers in the workplace more visible. In some families, domestic workers have been considered unimportant for so long, but now the pain of their absence is being realized. He called upon all to stand by those in danger. Emphasizing the importance of starting registration activities for the protection of domestic workers, he said that it is necessary to provide identity cards to domestic workers mentioning their work skills. He also mentioned the need to set a wage standard for domestic workers. He demanded that one-stop service be introduced in each ward council to determine where she would go if she was a victim of torture.

Abul Hossain said that domestic workers have lost their jobs and are in financial crisis. They do not have job security, appointment letter and fixed wages. He demanded the increase of allocation to the social security fund in the budget and implement it, adding that protection of domestic workers is not possible without government support.

Actress Deepa Khandakar said that more and more campaigns should be carried out on the rights of domestic workers, adding that many employers do not know their responsibilities and duties towards domestic workers. She emphasized on spreading the message of domestic workers’ rights in every household through media coverage.

Dipankar Datta said in his welcome speech that working people have suffered the most in COVID-19 situation. Domestic workers are one of them, he added. He also said that as part of the rural population, domestic workers come to the city for work but Corona has expelled them from the city. In this case, there is a need to monitor how much government assistance has reached them, he said.

Speaking on the occasion, Md. Habibur Rahman Shiraz said the government has voted in the ILC for the adoption of ILO Convention-189 to establish the rights of domestic workers and has formulated policies in its light.