Demand for end of violence against domestic workers 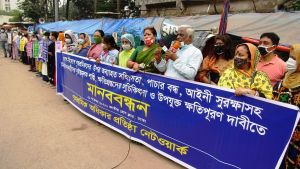 Trade unions and civil society representatives called for end of violence against domestic workers, exemplary punishment for torturers, legal protections, proper treatment of victims and appropriate compensation. Speaker’s demanded these at a human chain organised by Domestic Workers’ Rights Network (DWRN) in collaboration with the International Labour Organization (ILO) and Bangladesh Institute of Labour Studies-BILS on November 21, 2020, in front of National Press Club in the capital. 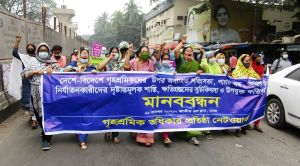 Speakers at the human chain said that domestic workers in the country and abroad are constantly working hard. Despite having such a large number of domestic workers, they are not covered by the labour law, nor are Bangladesh on the list of states ratifying ILO Convention-189. As a result, they are being deprived of legal aid at workplace; on the other hand, it is not possible for the country to play any role in any crisis outside the country. They said that thousands of domestic workers at home and abroad are going through a miserable time today who are being tortured and killed at different times. They demanded an end of the ongoing violence and trafficking against all these domestic workers, exemplary punishment of the torturers and proper treatment and appropriate compensation for the victims.