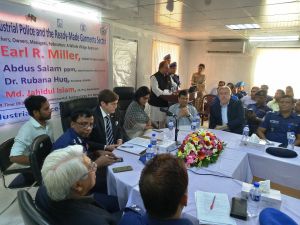 The workshop discussed the duties of an Industrial Police including the working environment, daily life, challenges and limitations. In the workshop, three case studies were discussed in three groups and the results were presented. The workshop was conducted by Karl-o-Clark of ICITAP.

The main implementing agency of the project is ICITAP, situated in the US Department of Justice’s Criminal Division and funded primarily by the US State Department. The main aim of the project is to increase communication and credibility among the stakeholders, increase the professional skills of the Industrial Police and positive promotion.