BILS and Care Bangladesh organised a Consultation Meeting with TCC leadership on Elimination of Violence and Harassment in the world of work on November 27, 2019 at BILS Seminar Hall, Dhaka.

The Main Objective of this meeting is as a TCC Member and concerned person as well as to play a role in the Ratification of ILO Convention 190 (Violence and Harassment Convention) from its respective position and the implementation of the law. 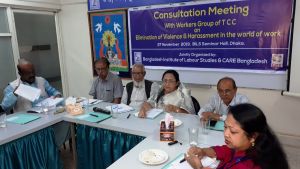