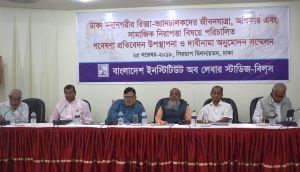 BILS organised a conference on presentation of study report titled, “Livelihood, Rights and Social Safety of Rickshaw-Van Puller in Dhaka City” and acceptance of claims on November 25, 2018 at CIRDAP Auditorium.

Presenting a study report on livelihood, rights and social safety of rickshaw-van puller in Dhaka city and accepting the study report and prepared claims and taking suggestions and opinion and way forward for future were the main objectives of the conference.

Emphasizing on license of rickshaw puller A K M Gias Uddin said, City Corporation shows negligence in case of providing license to the rickshaw puller whereas their expenditure is more than their income. Basically the workers, working in field are started to work as rickshaw puller. In this sector workers are being tortured by administration to general people in various ways, but they can not make complain to police against it as they do not have any organisation. Even rickshaw pullers have to take help from pedestrians to bury their dead body. How many rickshaws will run in Dhaka city that should be determined from City Corporation. He urged to control the rickshaw business and the allover development of rickshaw pullers considering the issue of their humanity.

Nurul Islam Khan said, organising rickshaw puller in Dhaka city has been trying for a long time. In this case, the owners and workers must be united. He urged to publish a short claim immediately by specifying the main points from the claim published by BILS.

Md. Harun Or Rashid said, there are no owners of battery powered rickshaw. These pullers do not get any place to stay and any garage to keep their rickshaw. Accidents are also high in these rickshaws. The owners are more victim than the pullers as these rickshaws don not have any license. He emphasized on ensuring better accommodation for rickshaw pullers.