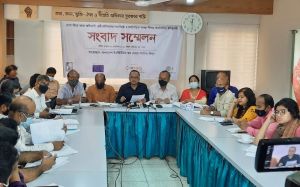 In the hope of changing the prosperities of the family, 23% of female workers went abroad and returned home before the time of one year, 18% stayed a little longer than one year, and 55% of them returned home by force. This information has come up in the research report of Bangladesh Institute of Labor Studies-BILS titled “Social and Economic Reintegration of the Returnee Female Migrant Workers: Success and Sorrows.”

The study was conducted based on the information collected from 323 returnee female migrant workers in three districts i.e. Jashore, Faridpur and Chattogram. The required information were collected from primary sources by applying qualitative research methods. The study said that the economic condition of one in every three returnee female workers deteriorated during the period than their earlier stage of migration. It is also found that a majority of them were worried about their livelihood in the future. About 85 percent of returnee female workers were frustrated over their current occupations and 57 percent were concerned over their lives and income.

The report found 55 percent returns of the female migrants was either unexpected or forced, 61% suffered from lack of food, water abroad, 7% of them got abused sexually and another 38% physically in the destination countries.

The study has also shown that female workers returning from abroad are neglected by their families and society. Among the economically backward families, they made the decision to immigrate on their own. Their opinions have no value in most families or societies today. None of them care for them and none of them believe them. 17% of workers have been subjected to unwanted behavior at the airport by family members while returning from abroad. 15% married returnee women are either divorced or separated. The husbands of 11% women workers have left them and 26% of women workers have experienced adverse effects in their marital life.

Presentation on Social and economic reintegration of the returnee female migrant workers: success and sorrows