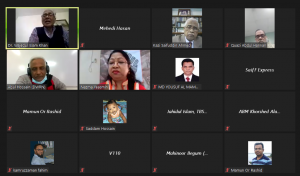 In 2020, a total of 44 domestic workers were subjected to various forms of torture in Bangladesh. Of them, 16 were killed, including 12 mysterious deaths. 12 people were raped, 12 were severely tortured due to physical injuries and four committed suicide. The data were presented in a virtual meeting titled “Workplace situation and legal protections for domestic workers in 2020” jointly organised by Bangladesh Institute of Labour Studies-BILS, Campaign for Popular Education-CAMPE, Hellotask, Nari Maitree, RedOrange and UCEP Bangladesh under Oxfam in Bangladesh and Global Affairs Canada-funded ‘Suniti’ project (Securing Rights of Women Domestic Workers in Bangladesh) on the rights, dignity and protection of domestic workers on January 31, 2021.

Speakers at the review meeting stressed the need to discourage child labour in domestic work, saying it was important to introduce registration of domestic workers in every police station and ward commissioner’s office so that the administration and local government could quickly communicate with the government about their assistance in times of disaster. They also said that the legal protections for domestic workers would be clearer if they were considered separately in law and policy as full-time and part-time according to their type of work. The speakers demanded full implementation of the Domestic Workers Protection and Welfare Policy, 2015, their inclusion in the Labour Law and ratification of ILO Convention-189 entitled Decent Work for Domestic Workers.

Presenting the keynote paper, BILS Director and Domestic Workers’ Rights Network Bangladesh (DWRN) Member Secretary Nazma Yesmin said that 2020 was a critical year due to the COVID-19 situation. The biggest challenge this year was to ensure decent work for domestic workers. Despite the fear of death during the COVID-19 period, the torture of domestic workers added another level of panic for them. She highlighted the findings of a survey conducted by the Bangladesh Institute of Labor Studies-BILS on the basis of daily newspaper reviews. She noted that the Domestic Workers Welfare Policy needs to be re-examined considering the inclusion of domestic workers in labour laws, determination of their working hours, and opportunity for workers rest and the right to organise. She also said that it is possible to take the activities from the divisional level to the district and upazila level by activating the central monitoring cell under the Ministry of Labour and Employment for the implementation and assurance of domestic worker protection and welfare policy. She noted that domestic workers, like workers in the institutional sector, need to have appointment letters, fixed working hours and fixed wages.

Bangladesh Employers Federation labour adviser Kazi Saifuddin Ahmed said, workers would not be benefitted if the Domestic Workers Protection and Welfare Policy could not be turned into law. Referring to those who are on the Labour Law Amendment Committee to discuss the issue, he said that if there is a law, it will be possible to ensure a fair trial for all tortures.

Bangladesh Labour Rights Journalists Forum President Quazi Abdul Hannan said, the image of domestic violence in newspapers was not the overall picture. The actual image is much more horrible. He mentioned that only cases of torture or hospitalization were reported in the newspapers. Noting that for a long time during the COVID-19 situation, domestic workers were restricted from entering various residential buildings, he said, during this time, the workers were unemployed and living a dehumanised life. He said ratification of ILO Convention-189 would make it much easier for migrant domestic workers to seek protection in the countries where they work.

Nari Maitree Executive Director Shaheen Akhtar Doly, said that Nari Maitree is arranging training for domestic workers through this project. More publicity is needed in this regard. She said a list of domestic workers needs to be prepared at the police station and ward level.

DWRN Acting Coordinator Abul Hossain called for the revoke of what is mentioned in sub-section 3 (na) of section 1 (4) of the Labor law, which does not apply to domestic workers.