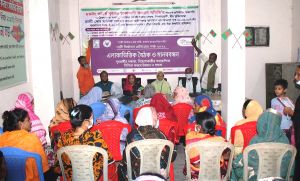 On the occasion of the 16 Days of Activism against Gender Based Violence 2021, a discussion meeting was held on December 9, 2021 at the office of the reserved women councilor of ward 52, 53, 54 in Kusumbagh, Jurain and a human chain was held in front of the office. The event was organized in collaboration with Global Affairs Canada and Oxfam in Bangladesh.

Abdul Wahed, a member of the Apex Body and acting president of the Jatiya Sramik Jote, spoke on the occasion. Speaking on human chain, he said that domestic workers should be considered as members of their own family. They have to be given fair rights and dignity of work, for which everyone has to come forward. He appealed to the people of all walks of life in the area. Hena Chowdhury, one of the members of the Domestic Workers Rights Network (DWRN), said that inhumane treatment of domestic workers must be stopped. He encouraged the domestic workers present to be aware of their rights. Chowdhury Borhan Uddin, a senior advocacy officer at BILS, cited the death of a domestic worker in Niketan on December 2, saying oppressed domestic workers who have been subjected to ongoing violence must stand by each other. He said that a concerted effort should be taken to build protest and resistance against torture in the area.

After the human chain, a meeting was held in the presence of reserved women councilor Khaleda Alam and local dignitaries, network leaders and domestic workers to create awareness about domestic violence and prevent torture. During the meeting, the ward councilor said that if any domestic worker of the ward has ever been the victim of any kind of abuse, they must report it to his office. He asked to make a list of domestic workers in the ward. He assured them that he would be by their side in any problem. He was informed about the activities of the project and invited to visit the training center. After the meeting, documents and publications on behalf of the project were handed over to the reserved female councilor Khaleda Alam.